Unknown (Appears to be mid-20s)

Not much is known about Vexel or how she ended up living with Pixel. It's even assumed that "Vexel" isn't her real name, and while she insists that her past is almost entirely unremarkable, the suspicious way she manages to change the subject whenever tasked with speaking about herself only serves to make others more curious, even if she truly is as ordinary as she claims to be.

Despite her sightly figure and gentle face, Vexel is unabashedly a rough-and-tumble, skirt-chasing guy's-girl (just a shame she isn't into guys). She's excitable, intense, and physical in nature, however all these traits are noticeably subdued thanks to her chronic lack of sleep that she attempts to remedy with countless naps throughout the day. Vexel's definition of a "nap," however, is drifting into a low-energy state where she loses the ability to process complex thoughts and reduces her locomotive ability to simple head movements and shoulder shrugs. No one has ever claimed to see her fully asleep (even when more energetic than usual she just claims it to be a result of a highly extended nap), and the notion that a human can function off of this type of rest alone without going insane is nothing short of a miracle.

99% of the things Vexel does fall under one of two categories: writing doujinshi, and getting inspiration for writing doujinshi. A regular practice for her is to draw out a few panels in the middle of watching an anime for the first time or even during conversation, while somehow still attentively contributing to said conversation.

Working as a Doujinka Edit

Vexel specializes in visceral action, and her main role in both her primary circle and her side project (literally called Side Proj SP) with Pixel is illustrating covers and intense, detailed panels. She also likes to give her input on plot direction and dialogue, but isn't too concerned about how much she influences the writing of her doujins.

Not a Morning Person/Plucky Girl Edit 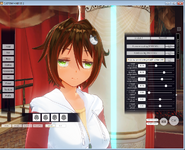 Vexel in her natural habitat
Add a photo to this gallery
Retrieved from "https://agerith-cr.fandom.com/wiki/Vexel?oldid=214"
Community content is available under CC-BY-SA unless otherwise noted.