Blaze grew up as something of a double black sheep – reserved and tending to isolate herself even as a child, she stood slightly apart from her parents and sibling, who as a family already distanced themselves from all further relatives. This pattern led to Blaze's personality developing significant amounts of pessimism and hyper-criticism, as well as severe trust issues, that have only been intensified by her mother's influence.

Blaze's mother, Veld, comes from a long lineage of military service and is generally considered a successful woman with a stable family and income, and a handful of accolades recognizing her service to her country. Blaze grew up on the stories of her mother's exploits and adventures, and aspired to live up to the nigh-perfect image she had of Veld. Oddly enough however, while Blaze has a deep interest in military media, customs, and technology, she has no intention of following the same military-driven path of her ancestors. Because of this Blaze is a bit anxious when discussing her plans for the future with her mother or anyone who is familiar with her mother's side of the family.

Much like her mother, Blaze has tan skin, amber eyes, and dark navy-blue hair, though unlike Veld her figure is much more slender – actually underwhelming in comparison – and she ties up all of her hair into twintails in contrast to Veld's partial side ponytail.

Blaze plans her outfit for the day as soon as she wakes up and will only change clothes when absolutely necessary – e.g. after taking a shower or if her clothes get ruined. Whether she's staying home or going out to a fancy dinner, her wardrobe of choice consists of an image tee under something from her vast collection of jackets, cargo pants, and boots (color coordination optional, though more often than not she'll be seen in an assortment of purples, whites, and blacks). Her clothing philosophy is "the more pockets, the better." Due to this, she refuses to wear dresses or skirts, and actually ended up skipping her senior prom because a classmate jokingly said it was absolutely necessary to wear a dress to prom. Blaze responded with "Oh. Guess I'm staying home then." It was mostly a heat-of-the-moment statement, though she doesn't exactly regret following through with it since she wasn't particularly interested in the event to begin with, and didn't have a date anyways.

Blaze has three prominent birthmarks: two are beauty marks – one on her left shoulder-blade, and another just above the right side of her mouth – and the third is her left canine, which is noticeably longer than her right, another trait inherited from her mother.

While meeting Anzai and the rest of her current friends has made Blaze much more sociable – even going so far as to apply for a position at a cosplay cafe since she liked the outfits the employees got to wear – this has scarce changed her (occasionally borderline-nihilistic) apathy, compulsive lying, and sometimes rather harsh attitude.

Of course, while this side of her is reserved solely for her friends, even then it isn't the only part that her friends see either. Lashing out and criticizing others is, albeit sincerely enjoyed and intentional, something that Blaze does entirely in jest, and she makes sure that her friends understand this, as unironically hurting someone's feelings would actually make her feel terrible. Many of her friends even enjoy Blaze's pseudo-rage when it's directed at someone else (usually Pixel, to the point that it's difficult to comprehend how they've managed to stay such good friends).

Around strangers, Blaze is someone who desires conversation, but unfortunately has body-language that actively works to deter it; she instinctively distances herself from others as much as reasonably possible, always has headphones on her, and has chronic resting bitch face. On the rare occasion that she's approached despite all of this, Blaze is very soft-spoken and amicable, though this does make it hard for her to keep conversations going when whoever she's speaking with didn't have a very specific reason for talking to her.

In a direct contrast to her mainverse career path, Blaze ended up influenced by her mother's exploits and decided to enlist as an Arks, following Veld's footsteps in the war against the darkers. Prior to the entrance exam, a particularly intense bout of self-consciousness and paranoia led her to undergo a transference procedure and become a Cast, allowing her to use her body as a conduit for her ice magic with no ill side effects. This decision ended up initially proving to be fruitless, as a combination of her continued neglect towards her magic studies and a lack of compatibility between her magic and the photon-based equipment used by Arks rendered the benefits of being a Cast moot, which resulted in her enlisting as a Ranger who used firearms exclusively. In spite of this, Blaze did eventually begin to study techniques later on to justify the operation, however she found herself unexpectedly specializing in dark techniques as opposed to ice due to the prior being, quote, "the easiest element to learn" out of all that were available.

Originally Blaze enlisted as a Ranger specializing in rifles, and upon her first promotion switched to a Gunner, putting her rifle on the sidelines in exchange for a pair of machine pistols. After exploring the realm of techniques however, she undertook Bouncer training, aiming to make techniques a part of her fighting style as originally planned.

This was an experimental period in Blaze's career; she ended up dabbling in every element with largely varying degrees of success (wind, electric, and light were particularly difficult for her to harness), however as the war intensified Blaze found herself relying more and more on dark techniques as she couldn't wield any of the others nearly as effectively.

Blaze’s wardrobe habits persist even as an Arks, save only for when she’s on duty. Since she doesn’t have to worry about pockets she’s free to indulge in whatever fancy getup she likes, and usually dawns much looser clothing that normal due to the acrobatic nature of being a gunner, though she is still averse to showing too much skin.

She is most frequently seen in Luccage Vest Shadow, notably – and uncharacteristically – without the accompanying jacket, though she does still cover most of her skin via undersuit. Of course this is but one of the many outfits Blaze switches between rather frequently.

After studying under several classes, Blaze forged a combat philosophy completely revolved around versatility and adaptability through the lens of mobility. Her munitions training as a Ranger guides her in tackling large-scale threats be it in count or size, her acrobatic modus operandi developed from training as a Gunner sharpened her reflexes and taught her how to engage enemies at multiple ranges, and her training as a Bouncer firmly reinforced her team skills as well as led to her integrating techniques into combat for further attack and utility diversity. 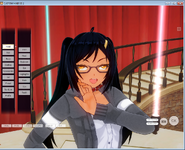 Blaze in her natural habitat
Add a photo to this gallery
Retrieved from "https://agerith-cr.fandom.com/wiki/Blaze_Nari?oldid=229"
Community content is available under CC-BY-SA unless otherwise noted.